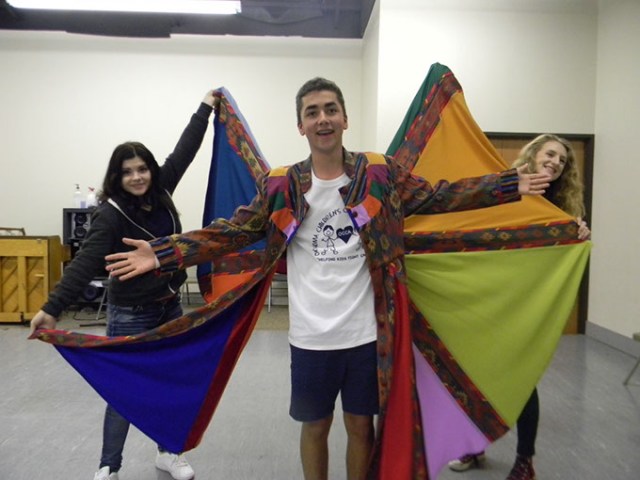 Working with children during a theatrical performance can be like flipping a double-sided coin, said Oklahoma City director Stephen Hilton.

He channels those energies into magic as Lyric Theatre’s Thelma Gaylord Academy presents Joseph and the Amazing Technicolor Dreamcoat 7 p.m. Thursday and Friday and 2 p.m. and 7 p.m. Saturday at Lyric’s Plaza Theatre.

Founded in 2001, the academy provides training and performance opportunities for young thespians interested in musical theater, and Dreamcoat, the latest in a full slate of productions this season, has become one of its most ambitious projects in recent memory.

“I’ve got a lot more people in the show than most productions have,” Hilton said. “We have 65 students in the show. The script doesn’t call for near that many, but that’s very exciting to have that many bodies onstage, especially for a stage that’s relatively small.”
Hilton said he considers teaching and directing the young throng of actors an opportunity rather than an obstacle.

“I’m able to utilize them in several different ways now,” he said. “One of the main characters in the show is the narrator … and I actually have six different girls that are doing the narrator for me – any of which could’ve done the whole show by herself.”

Hilton also said there’s an innocence in Dreamcoat that lends itself well to youth performances. A retelling of the biblical story of Joseph and his “coat of many colors,” Dreamcoat is a sugarcoated musical journey through country, calypso and even bubblegum pop. Hilton thinks older, more calloused actors could have trouble slipping into some of the play’s sillier scenes without being self-conscious.

“A cast of young actors still knows how to play,” Hilton said. “These kids still have an innocence about them that makes a show like Dreamcoat somehow more accessible, more real.”

Hilton believes their youth is an asset to a show like Dreamcoat.

“A cast of young actors still knows how to pretend. When they’re up there being guards for Pharaoh, they’re actually guards,” he said. “I don’t have to teach them how to act like guards, because they’re not acting, not in their minds. They’re being guards. There’s a certain freedom in working with that.”

Hilton also said the freedom a kid can contribute to a performance is especially suited for a show like this one. In one scene, for example, when Joseph sings, “I dreamed that in the fields one day / The corn gave me a sign / Your 11 sheaves of corn / All turned and bowed to mine,” girls dressed as sheaths of corn appear onstage and dance.

“That might not work with an adult cast,” Hilton said. “But so much of Dreamcoat is innocent, very simplistic. So when you hear the corn line and see these little girls … there’s a perfect synthesis of childlike innocence with the telling of that story.”

Like all good performances, however, Dreamcoat isn’t all rainbows and chocolate drops. Hilton said working with actors of varying ages also gives him certain advantages when casting.

“My two Josephs are just phenomenal. Both of them are sort of veteran performers around here. I think the great thing about working at the Gaylord Academy is that I have a lot of students who’ve never done a show before and a number of them who are very experienced,” he said. “So, not only can those more experienced kids bring a kind of gravitas to a role that you wouldn’t necessarily expect a student actor to have, but when you have them all onstage together, the younger ones learn by watching the older ones.”

They’ll have several chances to learn this year. After Dreamcoat, Hilton and company don’t slow down. Productions of The Women by Clare Booth Luce, Lillian Hellman’s The Children’s Hour and The Compleat Wrks of Wllm Shkspr (Abridged) are on tap for audiences this season.

The Gaylord Academy also will stage the large-scale revue I Wish, a musical adventure through “songs [they] wish [they] could get the rights for,” Hilton said.

“We’re also premiering 21 Chump Street, based on an NPR story about an inner-city school in New York. We’re doing the school edition of Rent with the older kids. Then, of course, we have our summer camps,” Hilton said. “So it just goes on and on.”

JOSEPH AND THE AMAZING TECHNICOLOR DREAMCOAT