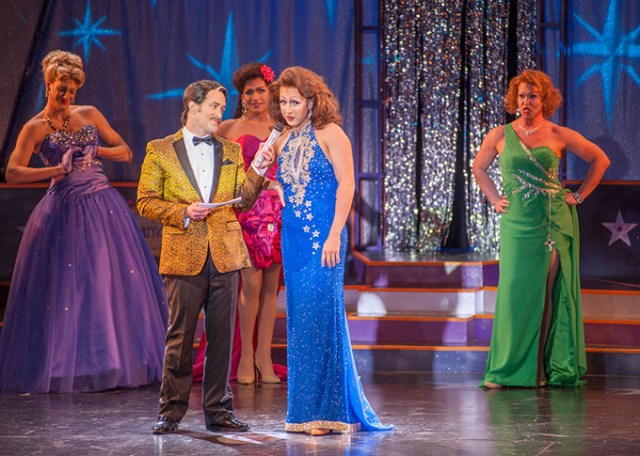 Perhaps theatrical drag shows run their course. One wonders about that while watching Lyric Theatre’s tepid production of Pageant: A Musical Comedy Beauty Contest, a 1991 spoof about as outré as a ham sandwich – and just as hammy.

The show’s conceit is male actors play the female characters. This must have sounded like a brilliant idea a quarter century ago.

Frankie Cavalier (Monte Riegel Wheeler in a black pompadour with a gray streak that recalls The Bride of Frankenstein), who is “tender yet macho and hot as a nacho,” emcees with smarmy savoir-faire.

You won’t find the faintest trace of subtlety in this show. Frankie introduces the contestants in “Natural Born Females” (which we know they aren’t), and the company follows that number with “Something Extra.”

For anyone who still hasn’t caught on, Frankie ends the song gesturing toward a contestant’s crotch.

The Miss Glamouresse pageant draws contestants from throughout the country with personalities to match. Miss West Coast (James Michael Avance) acts a little stoned. Beware of Miss Texas (Tanner Lee Hanley) if she loses the tiara. Miss Industrial Northeast (Ross McCorkell) is an earthy Latina whose talent is playing the accordion while roller-skating. The tomboyish Miss Great Plains (Sheridan McMichael) acts as if she’d rather be anywhere else but here. Miss Deep South (Shane Pruitt) is prim-and-proper to the extreme. And Miss Bible Belt (Christopher Sieker) combines religion and business in a way that could win her the Iowa Republican caucuses.

A host of real, past-and-present pageant winners were in the audience at the reviewed performance, including Miss Oklahoma and Miss Gay Oklahoma.

At intermission, I asked Miss Teen Moore-Norman what she thought of the show. She liked it.

At one point, Frankie pays tribute to the production’s wardrobe supervisor, whose name and particulars will not be revealed here. It’s the funniest 30 seconds in the show.

The cast and designers bought into director Ashley Wells’ concept for the show. You can’t fault the actors for lack of effort. Dawn Drake Toney’s set and props credibly reflect a B-list pageant and make good use of the Plaza Theatre stage, enhanced by Aaron Mooney’s lighting design.

Lyric staged Pageant in 2004 and 2006 at Freede Little Theatre. Why the company’s deciders deemed the show revival-worthy now remains a mystery.