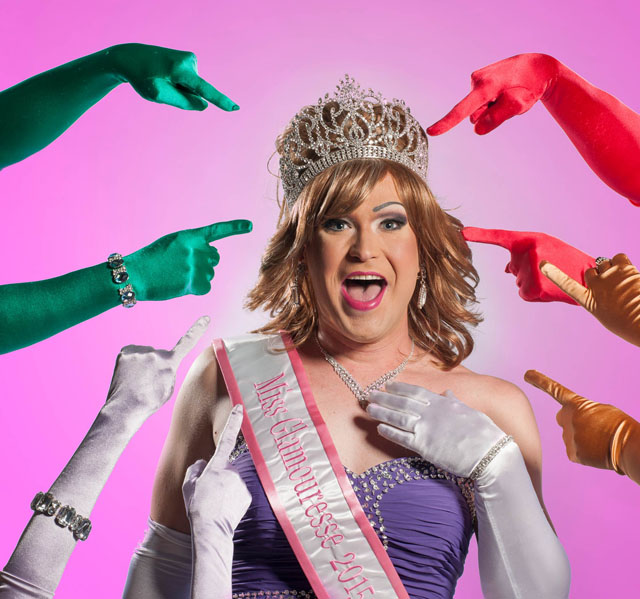 Lyric Theatre opens its 2015 season with the hilarious and ever-popular Pageant: A Musical Beauty Contest. It runs through Feb. 15.

Take your preconceived ideas about Miss America and the beauty competition circuit, amplify them by 10 and promptly forget them. Pageant’s beauty queens redefine talent, as all six contestants are played by men in makeup, high heels, gowns, wigs, props and swimsuits.

“Keeping that all together and coming across as women who do this all the time will be difficult,” said Ashley Wells, Lyric’s associate artistic director. “Navigating around the many levels of our set will be interesting. I will certainly be having fun in rehearsals, watching them figure it out.”

“Because of its success … we are excited to produce this show in Lyric’s Plaza Theatre,” Wells said. “It is a perfect show for the space and also for our audiences. The content of the show is completely clean. We have male actors playing female roles, and that is as edgy as it gets.”

Each night, new pageant judges are picked from the audience, so each performance and winner is often different.

“Jeffrey’s costumes are always brilliant. He has captured each character brilliantly. He is having fun with each character and what the costume says about them,” Wells said. “‘Miss Great Plains’ favorite color is beige, and Jeffrey can do amazing things with beige.”

“These talented and hopeful ‘ladies’ want nothing more than to bring home the title and will stop at nothing to get it,” he said. “Watching the contestants find out who wins and who loses alongside the audience makes for a hilarious and charming evening of theater.”